The President of the United States - Earth 10 - Ray Wonsowski

(okay, dusting off another moldy-oldie idea...one of my first ideas some 15 years back was for an Elseworlds story - a cross between the Freedom Fighters and P.K.Dick's Man in the High Castle.  The timeline would have worked out like this:

Screen 1 has a shot of Helena Kosmatos, also known as Fury -

- beating down on Japanese soldiers in Hawaii.
Screen 2 shows a long-haired and greying, but smiling, Jay Garrick in his classic Flash get-up, including the metal winged helmet, putting flowers in the barrels of rifles of Japanese army at super-speed, in San Francisco cheered on by hippies.
Screen 3 is the current core of the FREEDOM FIGHTERS:  Black Condor (looking very noir), Damage (looking very pulp), and Phantom Lady (looking very Barbarella) powered up and facing off Yakuza gangsters and San Diego cops.
Every seat at the table is filled, mostly Pentagon/military higher-ups, a few suits.  One suit in particular, his face is hidden in shadow (the PRESIDENT). - - oh, and in the middle of the War Room table is a little flag on a stand: the US flag, except... 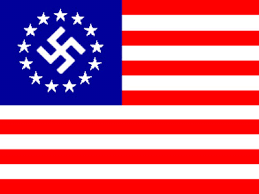 UNATTRIBUTED SPEECH BALLOON:  ...how Japan could let this happen!  The Spear...


Panel 2 - GENERAL WADE EILING pointing at us from across the table.  CAPTAIN NATHANIEL ADAM stands at attention behind his left shoulder, holding a sheaf of manila files.

EILING:  First off, Mr. President, the Spear only protects the Reich.  More specifically, the forces under the Fuhrer's control.  As long as Reichschancellor Goering holds it, we're good.


Panel 3 - CAPTAIN ADAM lightly tosses the files across the table to us.  GENERAL EILING continues speaking.

EILING:  It's been particularly effective against the magical mystery men.  But as you'll see, science is another story altogether.

EILING:  This leaves the Japanese West extremely vulnerable, and these new supers at our doorstep.  We need to be ready.


Panel 5 - Same as above, except behind EILING, ADAM is joined by Blackhawk Squadron Leader CAPTAIN JANOS PROHASKA, saluting.

EILING:  Captain Adam here will be stepping down from Blackhawk command.  Captain Prohaska has kindly agreed to give up the Warsaw post to help us out.


Panel 6 - Same as above, except at the bottom of the panel, there's a black and white photograph of four scientists standing in front of a large Kirby-esque machine.

EILING:  This is so Captain Adam can finish the treatments prescribed by Doctors Einstein, Erdel, Stein, and Allen.  If Project Firestorm is a success...


Panel 7 - The PRESIDENT, whose face has been in shadow, puts the photo on the table as he looks up at the wall screens.

EILING:  (off-panel) In the meantime, it wouldn't hurt to have your...friend...act as a deterrent.  In case this all spills over the mountains.


Panel 8 - The PRESIDENT leans forward, revealing the face of BRUCE WAYNE, serious and determined look in his eyes.

PRESIDENT WAYNE:  Assure the Fuhrer that the Reichstadt of Amerika stands ready.  Seig Heil.
Written by American Zombie (R. A. Wonsowski) at 12:30 AM