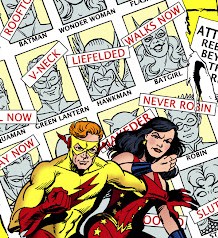 Because SHENANIGANS! on the New 52 for leaving him (and fellow Titan, Donna Troy) out of their universe or whatever...

I should probably state that Barry was always my favourite Flash, but Marv Wolfman (in New Teen Titans), and Mark Waid and Geoff Johns (in Flash), among others, told some nifty stories, taking Wally on a life's-path that I found myself relating to:  young adult trying to step out of a father-figure's shadow, becoming his own man by embracing family traditions after having rejected them.

Now, to be fair, iFanboy did a killer overview on Wally, and at the end of the column, Jeff Reid made the point that Wally did not need to be rebooted, because he had fulfilled the Hero's Journey, having gone from derivative sidekick to Teen Titan to legacy hero, and finally claiming the mantle fully as his own.

(The whole great article can be found at - http://ifanboy.com/articles/dc-histories-wally-west-kid-flash-i-flash-iii/?utm_source=feedburner&utm_medium=feed&utm_campaign=Feed%3A+ifanboy+%28iFanboy.com+Site+Content%29)

But still, I cannot help but think that there is still a place for him in this DCnU, so my challenge to all you ThoughtBallooners is this:

Where in the world is post-Flashpoint Wally?
What is he doing out there in the New 52?
Is he hanging out with other forgotten favourites, like the aforementioned Donna, or Stephanie Brown?
Playing "Gotcher nose" with the Question or clinging to Static?
Is he still speeding?  Is he normal?  Or at least unpowered?

You at home can play too!  Just leave your scripts in the comments below!

And now...The Further Adventures of WALLY WEST!
Written by American Zombie (R. A. Wonsowski) at 12:00 AM