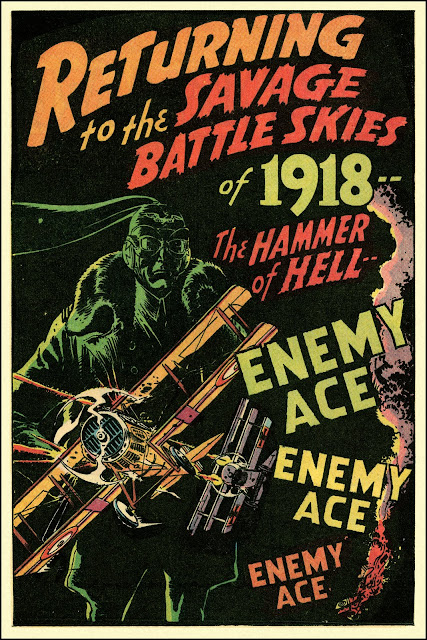 Because it's interesting to see war from the other side.

Hans Von Hammer, the Hammer Of Hell, was created by Robert Kahnigher and Joe Kubert in the pages of Our Army At War #151. ﻿A German air ace in WWI, Hans is the most deadly pilot in Germany, and possibly in all of WWI. Each adventure, he earns at least one kill, and with it another trophy. But, as we see time and time again, he finds no joy in celebrating these victories, only in hunting in the forest with a wolf, who unfailingly greets him with a tense staredown that only ends in the acceptance that they cannot kill one another, as each sees the other as his only true companion and brother in the hunt.

Email ThisBlogThis!Share to TwitterShare to FacebookShare to Pinterest
Labels: Enemy Ace, Niel Jacoby, Why, Why?