Panel 1: Opening Title Block. Snoopy is writing while on top of his dog house – but instead of typing on his typewriter, is instead trying to type on tablet computer.

Panel 2: LUCY is walking in front of CHARLIE BROWN. She is carrying a football.

LUCY: So I’ll hold the football, and then you try to kick it.

CHARLIE BROWN: Oh, no. I’m not falling for that again. I know how this works!

Panel 4: LUCY holds up a generic smartphone and shows it to CHARLIE BROWN. CHARLIE BROWN looks contemplative about what LUCY is saying.

LUCY: Nonsense, Charlie Brown. I’m planning to record it and put it online. You don’t think I’d save the moment if it meant there was video evidence of me pulling the football away, do you?

Panel 5: CHARLIE BROWN is thinking to himself as he walks away from LUCY.

CHARLIE BROWN: She’s right. She wouldn’t embarrass herself that way if millions could watch it later.

CHARLIE BROWN: This time I’m sure to kick that football!

Panel 8: CHARLIE BROWN comes crashing to the ground on his back.

Panel 9: CHARLIE BROWN lies on the ground, his face has a ‘I can’t stand it’ look. LUCY stands over him, holding the smartphone up for CHARLIE BROWN to see.


(As a bonus this week, after having come to the decision that I was going to try to write a comic that [hopefully] feels not too far removed from the actual thing, I decided to go the extra mile and try to do the art for my script this week as well.) 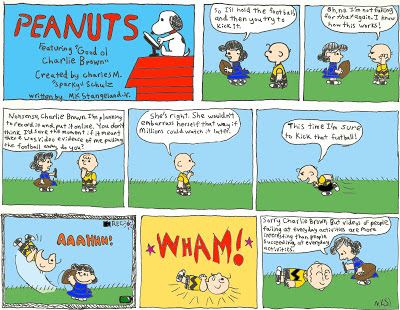 (I can't say I'm entirely pleased with the result - I'm feeling a mix of "If I'd put more work into it I could have come up with something far closer to Schulz' art style" and "I can only get it so close to the real thing.", but I'd like to think that I can at least give myself points for effort.