(If you'd like to see the original Questionaire I did back near when I first became a full member, you can find it over this way.)

Who are some of your other favorite comic book characters?

As my ‘Why?’ post for him should have made clear, I’m probably a bit of a Dr. Dinosaur fanboy. I even said as much at the time. And it still stands. Nothing against Atomic Robo, but I find his prehistoric nemesis to be a far more entertaining character in and of himself. In an alternate universe where it’s Dr. Dinosaur who’s the main character of his own comic where his plans of mad science are regularly stopped by a rotating cast of heroes (Robo among them), that’s probably my favorite comic book.

I also feel compelled to mention Stephanie Brown – AKA Spoiler, AKA Robin, AKA Batgirl. Maybe I’m just caught up on the Steph bandwagon since I wasn’t even aware of the character for most of her history, but what I read of the character in Bryan Q. Miller’s Batgirl series quickly made me a big fan of her and her undying, perky upbeat optimism.

Other characters I have a particular fondness for include Taskmaster, Beta Ray Bill, Komodo, and the Teenage Mutant Ninja Turtles.

Who is your favorite comic artist?

If there’s one artist that makes me particularly happy to see comic art from, it’s actually two – the Japanese duo most frequently known as Gurihiru. Their art might not be as realistic or complex as other artists, but what it most definitely can be described as is something that I think is an essential quality for comics that far too many seem to forget about these days – fun.

In what is no doubt not a coincidence, whenever I see their name attached to a project, I generally feel safe in assuming that whatever the book is I can expect to enjoy myself reading it, and I’d feel little concern about having to defend or wave of concerns of questionable elements while handing it to a new, potential comic reader and telling them “this is why I love comics.”

Since your last questionnaire, who has been the most fun to write & which of the scripts you’ve written is your favorite?

How can I possibly pick? There have been so many fun characters to write and so many scripts that I love – Peanuts, Dr. Dinosaur, Deadpool, and more.

But if I were to pick one that stands out, I’d choose the unlikely pairing of heroic man and villainous ape known as Baker & Grodd. They’re a duo that I first put together during Animal Man week, then unexpectedly made a return for Planet of the Apes, and in both instances proved to not only be a fun pairing, but very well received by the readers as well.

Odds are that they’ll make a return sooner or later. Potentially when you least expect it.

At the very least we’ve still got a Gorilla Grodd week that’s yet to be utilized, and it would darn near criminal not to put these two back together when that time comes around… 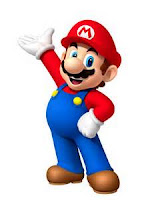 This could probably vary from week to week based on my mood (last time I named the Animaniacs and Freakazoid!), but these days I think I’m currently feeling partial to Nintendo’s Mario or Samus Aran. The real Samus Aran, mind you, not the imitation wannabe from Other M.

Not that I’m expecting to ever get the opportunity, Nintendo being who they are, but I think it would be especially fun to try the challenge of writing an all-ages style Mario comic that maintained his trait of hardly ever saying anything the audience can actually understand.

Which character, if any, do you most wish you could re-write your script for?

If I make it easier by counting only the scripts written since officially becoming part of Thought Balloons!, I’d love to take a re-do on my “What If…?” script. While I love to be able to write my scripts as thought they were part of a larger story that could theoretically be taken out of or put into a full 20/22/whatever page comic, I think that this opportunity was one instance where trying to write that way backfired on me.

It’s particularly disappointing on a personal level for two major reasons – one, because it was during a week that I myself choose; two, because it was based on a continuation of both one of my favorite one-shot comics and actual “What if…?” issues, the Newer Fantastic Four. So aside from it being a sub-par script, it also feels like a bigger let down because of what it came from.

Which script(s) have been your favorite on the site?

Aside from the scripts I pointed out since the last questionnaire I wrote from this site, the new additions I’d add to my favorites written on this site include:
* J.D. Coughlan’s “Pugilarchy” from Wrestlemania, due to a small part of me wishing it was a more accurate representation of real politics than it is;
* Shaun Richen’s “Contacts” from Peanuts, due to how much it read like a genuine Peanuts script;
* Ben Rosenthal and Rol Hirst’s script from the Christmas 2011 North Pole Week “Luke Cage’s Sweet Christmas” (Part I & Part II), a two-part script written in the vein of Twas the Night Before Christmas which provided me a second prompt for the week when I felt compelled to write a Part 3 conclusion;

* Matt Duarte’s “Elseworlds” from the special DCnU Pitch week, because I’m jealous for not having thought of it myself.

Any lessons you’ve learned while writing at Thought Balloons?

One thing I’ve learned is that giving feedback and criticism is sometimes harder than you might think. Especially if you’re trying to give meaningful feedback.

It’s one thing to read a script and just say “Nice job”. Most the scripts that show up on this site are decent at the very least, and a majority of those are even better. Saying nothing more than “Nice job” is something that can just as easily be accomplished with the use of the stars. But to actually think of something meaningful to say that’s not being pulled out of nowhere, that takes more effort.

It’s especially true when – as seems to be the case for a lot of scripts I read – what I’m aiming for in my scripts and the style/tone I write with is different from what other people are aiming for. And you can give absolutely the nicest piece of feedback/criticism in the world, but if it completely divorced from what the author has tried to write, it isn’t worth the words it’s made up of. It’s one thing to point out where someone can make an improvement, it’s another to suggest they go a direction with their writing that doesn’t suit them.

It’s all a tad regrettable, since the amount of feedback I give on other people’s scripts these days (or lack thereof) makes me feel like I’m slacking in my involvement in the site a lot of the time.

What do you think has been your biggest improvement while writing at Thought Balloons?

While I think everything has improved at least a little, I think the part that’s gotten the biggest improvement has been the pitch and submission process. I’d already had experience writing scripts - comic and otherwise – prior to learning about Thought Balloons!, even having developed my own scripting style, trying to sell people on what I’d written was a skill I was effectively clueless on.

Since then, I’ve managed to see some great examples, get some great feedback from other Thought Ballooners, and all in all I think I’m leaps and bounds above where I used to be in this area. While I’m certain my pitch skills could still use some improvement, at least I’m not nearly as clueless about it as I used to be.