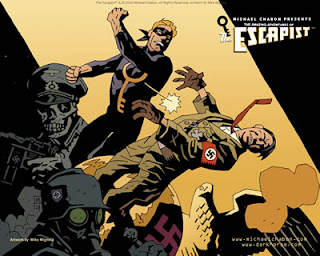 In a summer rife with comic book adaptations The Escapist is one of the rare examples of a character born in prose who found his way into comics after the fact. The Escapist, for those living under a rock, came into existence via Michael Chabon's Pulitzer Prize winning novel The Amazing Adventures of Kavalier and Clay. That book follows the lives of two Jewish cousins, artist Joe Kavalier and writer Sam Clay. The novel is firmly rooted in the Golden Age era of comics and The Escapist is the creation of Joe and Sam.

His origin is very much of that era. In it, escape artist Tom Mayflower is recruited by his uncle into the highly secret League of the Golden Key. Bestowed with a costume and a golden key he learns that whilst wearing the costume he becomes physically stronger and is capable of fantastic feats of escapology, strength, agility and derring do. The Escapist himself is a great homage to the characters that came out of that era and is supposedly partly based on the youthful exploits of comics book legend Jim Steranko. 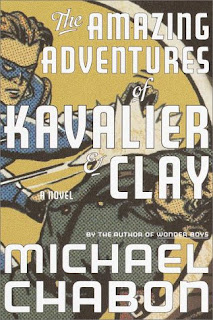 Jerry Siegel’s father suffered a heart attack after his store was held up in armed robbery and it has often been said that Superman was partly born out of this tragedy, a helpless bookworm on one hand and an all powerful near-God on the other. One who could leap buildings and stop bullets without breaking a sweat. The Escapist serves a similar purpose for his creators. Joe himself has just escaped a war ravaged Czechoslovakia, leaving behind his friends and family. The Escapist allows Joe to deal with that survivors guilt. Not only that but it could also be argued that the character speaks to Sam’s own desire to escape from his frail body (Tom Mayflower has a crippled leg when not wearing the costume) and repressed homosexual feelings.

It was only logical that he would also ‘escape’ prose and make his mark in comics too. Dark Horse Comics created an anthology title centred around the character four years after the novels debut entitled Michael Chabon Presents the Amazing Adventures of the Escapist. These stories were written and drawn in a mock Golden Age style, perfectly evoking a more innocent era of comics. Two years later a young upstart named Brian K. Vaughan put his own spin on the character with the eponymous series The Escapists. This followed the fortunes of three creators as they buy up the rights to the Escapist character in an effort to revitalise him for a modern audience. The series is a great love letter not only to comics but the hardship, love and craziness that goes into making them. 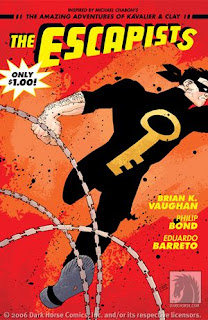 I chose this character not only because of my love for Chabon’s novel (it’s still my favourite book of all time) but the range of subject and tone that can be explored with the character. Pulp, adventure, history, war and even the metafictional aspects of comics and their history are all wide open here with Tom and his excellent supporting cast. Ultimately though The Escapist shows us how the best comics help us leave behind our mortal frames and the constraints of dreary reality if only momentarily.
Written by Dan Hill at 12:00 AM

Email ThisBlogThis!Share to TwitterShare to FacebookShare to Pinterest
Labels: Dan Hill, Superman, The Escapist, Why?