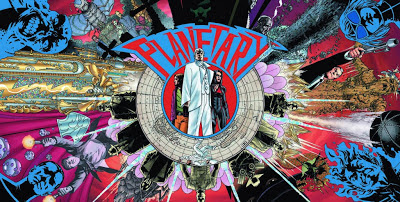 No, I'm afraid you don't get a say in the matter. We only recruit the best and brightest, whether they like it or not. So you should feel flattered. Or else.

What is Planetary, you ask? Planetary is one of those super-secret organisations you're always hearing lunatics and conspiracy theorists (same thing, really) rave on about. Except, we're not trying to hide anything. We're trying to bring the world's secrets to light. We find that which has been covered up and uncover it, for the benefit of all humanity.

We are mystery archaeologists.

You'd be surprised at the things those in power want to keep from the masses: Ghosts, superhumans, magic, giant radioactive Japanese monsters -- it's all real, and more besides. The people in the shadows think we all need to be spoon-fed reality. Planetary treats you like an adult.

But it's a dangerous job. Those shadowy people, supposedly looking out for us all, will do anything to keep their secrets, because their secrets are the source of their power. Because of this, we have a rather exceptional field team to take care of such bastards:

Elijah Snow -- One of those curious "Century Babies" granted the power to freeze things and tasked to watch over the 20th century (and, apparently, the 21st). He's over 100 years old, and while you wouldn't know it from looking at him, as soon as he opens his mouth you can tell. Grumpy, cold-hearted git.

Jakita Wagner -- She's a "punch-your-brains-into-mush-first-ask-questions-later" kinda lady. Although absolutely charming if you don't piss her off. Unless she just gets bored. She's one of our best uncovered superhuman secrets; her own origins exotic and mysterious. But that's a story for another time. Or never.

The Drummer -- Perhaps the next evolution of humanity, perhaps just a dipshit who watches too much TV, Drums has the ability to "see" information. Mostly from electronic media, but he can occasionally decode the vast swirling matrix of information we call the universe, too. He's the first human being properly adapted to the digital age. And he's an annoying, lazy-arse whacko.

If you're very, very, very lucky, you will pass your whole career here at Planetary without ever meeting the field team.

Your salary is $1 million a year for the rest of your life. Even if you quit tomorrow. Which you won't.

Because, aside from the sweet pay, there's something Planetary provides that you just cannot turn down, something nobody can resist, the very reason we were founded in the first place: The Truth. 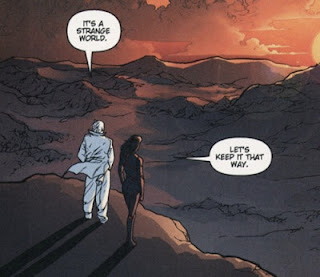 Email ThisBlogThis!Share to TwitterShare to FacebookShare to Pinterest
Labels: J.D. Coughlan, Planetary, Why