Why The Umbrella Academy? 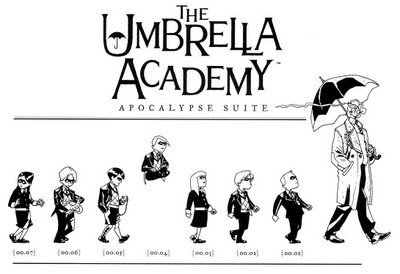 Why The Umbrella Academy for my pick this week? Well because I used to be a snobby geek and this comic helped me stop that.

The only reason I read the first trade for this book was so I could say it was terrible and have evidence to back it up. I was a snobby nerd in my youth and figured the only reason Gerard Way was getting to write a comic was because he was in a popular band, (a band I didn’t care for.)

I read a copy of the book and when I was finished I thought, “Wow this is a great book”, wait what, no I must have been mistaken surely it couldn’t be great. So I read it again… 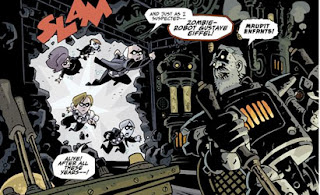 Damn, it was even better the second time around.  The story was the X-Men by way of Hellboy with a big helping of pulp. The story was everything I had ever wanted from a comic, it was action, adventure with strange superheroes, it felt fresh and oh so cool, like someone had written a comic just for me, It just so happened that someone was Gerard Way.

Oh man and the art! This was the first time I was introduced to Gabriel Bá. His style was unlike any of the house style stuff at the big two. He drew with flair and passion like a Saturday morning cartoon on shrooms. Within ten pages the dude had shown me a wrestler battling a space squid, kids fighting a monument brought to life and a zombie robot. He instantly entered my top five favorite comic artists ever (and remains there to this day.)

I had learnt my lesson, a hard one for a snot nosed teenage comic fan to learn, but an important one, The Umbrella Academy taught me to never pre judge something. Everything creative should be judged on its own merits.

So I didn’t like My Chemical Romance (Gerard Way’s band) so what. I don’t like the way my mum cooks her bacon I still bloody love her. 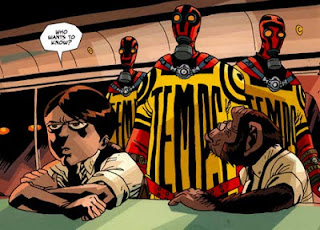 Tail between my legs and humbled by this incident I swallowed my nerdish pride and added the second mini series to my pull list, never to pre judge again.

Email ThisBlogThis!Share to TwitterShare to FacebookShare to Pinterest
Labels: Shaun Richens, The Umbrella Academy, Why, Why?