Adventure Time – Time for ADVENTURE! With the King of Ice and Gunter – MK Stangeland Jr.

Panel 1: KING OF ICE - a heroic mirror universe version of the ICE KING, who looks mostly like his counterpart aside from having a far more clean-cut beard - is standing atop a wall of his ice fortress. He’s currently rolling his eyes.

Standing next to him, and looking about the same, is GUNTER the penguine.

Panel 2: Standing outside the KING OF ICE’s fortress are SINISTER FINN and BAD DOG JAKE, the evil mirror universe versions of FINN the HUMAN and JAKE the DOG. The most notable features that distinguish them from their heroic counterparts are that FINN has an evil looking mustache (naturally) and scar while JAKE has an evil looking goatee (also naturally) and wears an eye-patch. Not because he needs the eye-patch, mind you, but because it looks cool and he thinks it makes him look kind of evil.

KING OF ICE: (From off panel, continued from PANEL 1. Should be enlarged for emphasis.) …SINISTER FINN and BAD DOG JAKE?

Panel 3: SINISTER FINN, holding his sword, points up at the KING OF ICE. BAD DOG JAKE shakes his fist at him.

SINISTER FINN: We heard you’re giving refuge to a princess!

BAD DOG JAKE: So we came to kidnap her!

Panel 4: KING OF ICE gives an offhanded wave of dismissal.

Panel 5: KING OF ICE leans down to whisper in GUNTER’s ear.

KING OF ICE: Show our guest out through the back exit, and make sure she gets there safely.

Panel 6: BAD DOG JAKE points up at KING OF ICE and shouts angrily.

BAD DOG JAKE: I heard that!

Panel 7: SINISTER FINN charges at KING OF ICE’s castle with his sword up and at the ready. BAD DOG JAKE runs right behind him.


(For kicks, I also decided to do a quick concept doodle on the subject) 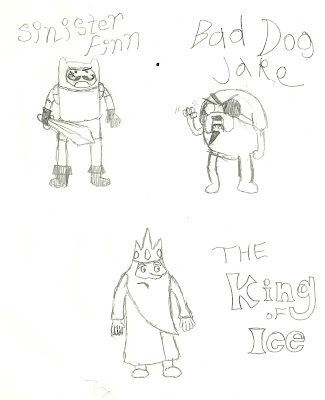