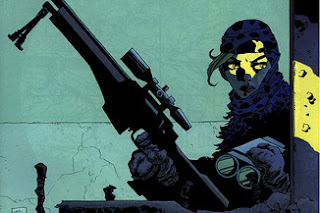 In attempting to answer the above question I thought about the espionage, the games and oneupmanship behind closed doors, the plausible and scary scenarios writer Greg Rucka often throws into the mix. But, truth be told, it all comes back to Tara Chace.

For those not in the know, Queen and Country is a comic book series (and three prose novels) that follow Tara Chace, an operative of the SIS (Secret Intelligence Service). The series described a number of Tara's missions as well as the subsequent fallout and political machinations surrounding them too. Over the course of the series Rucka not only fleshed out a great supporting cast for Tara, but showed us the effect such a life had on those that perpetrate it.

As Rucka explains in this awesome article over at io9:

"Tara can kill people with her bare hands and escape from Iran with two bullets in her body, but she can't maintain a personal life worth a damn." 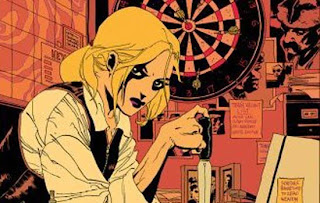 As those that follow Rucka's work know, he's very adept at writing female characters, it's perhaps even one of his hallmarks. I'd go out on a limb and say that Tara is his finest creation. The first time we see Tara in the series she's assassinating a man in Kosovo, one of the most dangerous and unruly places on Earth. She does it quickly, calmly and cleanly. We then see her subsequent escape. She even takes a bullet at one point but keeps it together, using her looks and brains to flummox the guards at the border crossing, ensuring she lives to see another day.

When we see Tara a second time it's 3:57AM on a rainy night in London. Tara is awoken by a phone call from her boss to report an attack on the SIS headquarters (retaliation for  the assassination Tara carried out). Her bedroom is, to put it mildly, a mess. Books, rubbish and empty bottles litter the floor. Tara's bed covers are strewn every which way and she even clutches an empty bottle of some undisclosed alcoholic spirit. The first thing she does when hanging up the phone is to rush to the toilet to throw up. 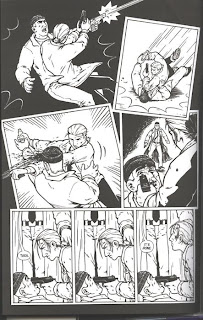 This is Tara Chace in a nutshell-- professional to the hilt but tragically flawed.

This is before we get to everything else that makes the series great. We have the ever evolving roster of "Minders" (agents) and their changing dynamic with each other. We have their boss, Paul Crocker, a man of principles who is often tasked with breaching them, much to his disdain.

Queen & Country provides a stark, realistic look at the world of espionage-- more Len Deighton than Ian Fleming. It shows us the chicanery, the deals, the questionable ethics, the danger and the toll it takes on those who are constantly immersed in this world.

Email ThisBlogThis!Share to TwitterShare to FacebookShare to Pinterest
Labels: Queen & Country, Why?