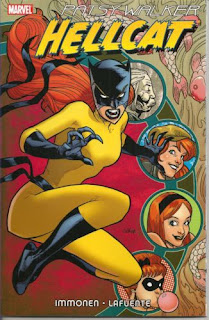 As far as comics go, Patsy Walker has a long history. While not initially a character who in any way resembled a superhero, she first showed up way back in 1944 – less than four years after Captain America made his debut – and her own self titled Patsy Walker­ was among the first comics to be labeled as an actual “Marvel Comic”.

And this is stuff that, believe it or not, is more or less still canon in the actual Marvel Universe (to some degree). An impressive feat that is topped off by having been reworked into her more familiar status as one of Marvel’s countless superheroes, allowing her to escape the fate of forgotten obscurity that took hold of most with origins such as hers.

Talk about versatility and tenacity.

But while I’m certainly not going to be one to say you can’t play into her pre-superhero days, I’m guessing that most people are far more interested in her current status – the superheroine known as Hellcat. For which I’ve metaphorically enlisted the help of special guest Kathryn Immonen by pulling from her original pitch for the “Snowball Effect” mini-series, as published in the Patsy Walker: Hellcat TPB. Because I think she sums up the “Why?” better than I could.

“With her ability to see magic (but not wield it) and punch people really hard (but still have them somehow like it) there’s no reason that Patsy Walker / Hellcat can’t be a kind of Indiana Jones with a pinch of Hellboy for Marvel. Her vibrant likeability should be the ace up her sleeve but once she’s deep in the backwaters of ice and snow and ancient crazies, she’s just a big city interloper.”

She’s immensely likeable, she’s versatile, she’s full of energy and pep, she’s inclined to be drawn towards the weird and mystical, and she hits stuff. Sounds like a good recipe to me!
Written by MK Stangeland Jr. at 12:00 PM

Email ThisBlogThis!Share to TwitterShare to FacebookShare to Pinterest
Labels: Patsy Walker Hellcat, Why?