Armor - The Fault in Our Stars, 3rd Excerpt - Ray Wonsowski

(ok, I promise to make this the last double-pager...well, for a while at least...but I wanted to wrap this up in a big way) 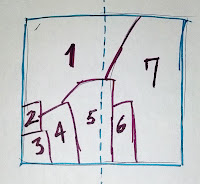 NOTE:  In panels 3 through 6, ARMOR will be holding an umbilical line.  This umbilical should wind its way from panel to panel and vary in size smoothly as the action shifts in pov, almost as a freely shot cable would as it unspooled in the vacuum of space.  More on that in a second...

Panel 1 - Bird's-eye-view.  Background is the deck of a Cathedral-ship.  A number of robed faithful of the Universal Church of Truth are fighting a small group of women holding their own against them.  They are small from our perspective, but we can pick out the figures of MANTIS, HELLCAT, CRYSTAL, and VALKYRIE fighting hand to hand.  In the midground, we see CAPTAIN MARVEL (Carol Danvers) delivering a winning blast of energy into the reeling MAGUS.  Foreground, the Cancerverse ADAM WARLOCK has turned his head, his attention drawn.  He is looking directly at Panel 3, but is pointing up at us, as if we were the orbiting Quinjet.

Cancerverse ADAM WARLOCK:  ...damn it all, it was a diversion...


Panel 2 - Close-up, the head and hands of CLEA.  She is gesturing, her fingers aglow with dark magic.  Her hair is blowing wildly, but her face burns with the Faltine Flames, just like her father, Dormammu.


Panel 3 - The airlock of the Quinjet.  Behind what looks like a harpoon cannon with an oversized rifle scope attached that looks like it was designed by Kirby, we see KATE BISHOP, one eye to the scope, firing the huge gun.  From out the front, an umbilical unspools into Panel 4.  CLEA stands behind KATE, siphoning her magic into the umbilical.


Panel 4 - Foreground, ARMOR, in her space suit, flying out of Panel 3, gritting her teeth and holding tight to the umbilical, magic flowing into her hand.  In the background, Cancerverse ADAM WARLOCK is kept from giving chase by STARDUST and the SILVER SURFER, who restrain his arms.  The umbilical continues to flow into Panel 5.


Panel 5 - Still holding the umbilical, ARMOR flies right at us, upside down and arms wide, her free hand open toward us as if to grab something.  Through the faceplate of her helmet, we see her face grimace as she braces for impact.  The umbilical recedes as it unspools into Panel 6.


Panel 6 - From a distance, we see ARMOR slam into the chest plate of GALACTUS.  An inset shows two eyes (we are not sure if they are hers or CLEA's) wide with the Flames of Faltine.


Panel 7 - Background, at the top of the panel, the stars.  Foreground, GALACTUS, now magically fed by the umbilical that ARMOR carried, is rejuvenated, aware, and very angry.  Though ARMOR is too small to see from this pov, we do see the umbilical, leading off to the unseen Quinjet, surging with energy into his chest plate.  He is surrounded by ARMOR's orange protective aura, which, though completely surrounding the form of GALACTUS, has taken on the features of Japanese samurai armour, making GALACTUS appear more monstrous and fearsome than ever.