That would be Arkham Asylum. The rug under which Gotham's criminally insane are swept, until it's bursting at the seams with wicked madness, so that the very bricks and paint themselves become infected by it. 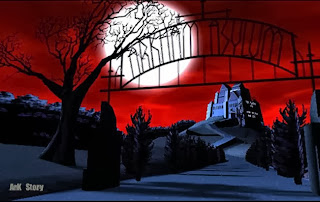 There is evil in Arkham. Not just the inmates. The asylum itself seems to emanate evil, but also attract it. Like a great maw, sucking in the vile and the cruel for sustenance before regurgitating much worse things back into the world for later consumption. A perpetual motion machine of madness.

Arkham Asylum was born of madness, and madness is what keeps it alive. Almost as if it were a living, breathing thing, allowing its prisoners to escape again and again to justify its own existence. But that's the kind of thinking reserved for horror stories. Arkham isn't like the haunted houses of such tales.

Its monsters are quite real.
Written by J.D. Coughlan at 12:00 PM

Email ThisBlogThis!Share to TwitterShare to FacebookShare to Pinterest
Labels: Arkham Asylum, J.D. Coughlan, Why, Why?