What do you say about a juggernaut like The Simpsons that hasn’t been said already?

You can’t, really. In my home country of the US, at least, they’re practically ingrained into the popular culture, and you probably wouldn’t have too much difficulty finding someone who could at least recognize the faces of Homer, Marge, Bart, Lisa, and Maggie around most the rest of the modernly civilized world.

While it can be argued whether the shows currently quality means it should have gone off the air years ago, it would be more difficult to argue against the impact they’ve made during the process of becoming one of the longest-running TV shows ever, from creating words and phrases that have become entrenched in the English lexicon to the great many moments across their 500+ (AND COUNTING!) episodes that still resonate years (or even decades![!!!]) later. 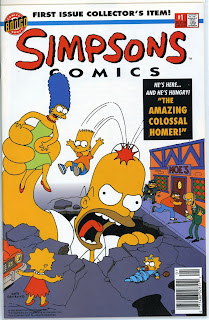 The real reason why it’s The Simpsons, though?

Because with their yearly Treehouse of Horror episodes, it seemed like a reasonably segwayed follow up to last weeks Halloween-inspired Arkham Asylum pick.
Written by MK Stangeland Jr. at 12:00 PM

Email ThisBlogThis!Share to TwitterShare to FacebookShare to Pinterest
Labels: The Simpsons, Why?