A long time ago, before Twilight and its sparkly, expressionless would-be romantics, vampires were scary. They stalked the night, hiding in the shadows, creeping up on their human prey, only to sink their sharp fangs in and drink the blood like it was juice from a mango. Skinner Sweet is not only a return to that terrifying brand of bloodsucker; he's even scarier.

Co-created by acclaimed master of horror fiction Stephen King, Sweet is the first ever American vampire. With him, a new strain of vampirism is created; just as different animal species are found on different continents. Skinner Sweet is the next evolution of vampire. He, and all other American vampires, can walk during daylight, but are weak when there's no moon out, and are invulnerable to just about everything except gold.

But that's not all that sets Skinner apart. Don't let his sweet tooth (sweet fang?) fool you -- the man is evil to the bone. Even before he was feasting on the living, Sweet was a ruthless old west outlaw, the worst of the worst, with absolutely no empathy for his fellow man. In fact, he almost seems to go out his way to treat people worse. It's in his blood.

As a vampire, Sweet has lived a long time, and has seen much of America's 20th century unfold before him. Not that he'd care himself though, but Scott Snyder and Rafael Albuquerque's American Vampire is as much about history as it is about horror. Skinner Sweet is just along for the ride. 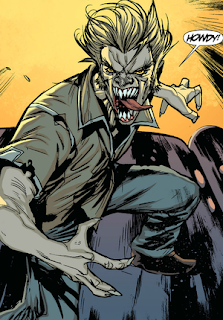 And there's nothing sparkly or romantic about him.
Written by J.D. Coughlan at 12:00 PM

Email ThisBlogThis!Share to TwitterShare to FacebookShare to Pinterest
Labels: Skinner Sweet, Why, Why?