As I remember my childhood, I had this odd habit of trying to convince my parents to buy video game consoles for pretty flimsy reasons.  Without going too much into the multitude of silly details, it all goes back to the first video game console my household ever owned: the Super Nintendo Entertainment System (remember when consoles still had wacky names like that?).  I say my household's because it was technically my Dad's.  For some ludicrous reason, one year I suggested we buy him an SNES for Father's Day.  And since my parents were apparently really into humouring me, we did.


All this in spite of the fact that my Dad had never (and still hasn't) played a video game in his life.

So while he didn't have much use for it, I certainly took full advantage of its arrival within our household.  As you may have already gathered, video games were an incredibly formative part of my misspent youth, and that SNES was what formed the habit.  Of course, a system is all well and fine, but you need some games to play on it.  We initially had Super Mario World, which was all well and good, but the game that really set my world on fire was (unsurprisingly considering the title of this post) Donkey Kong Country.  Although the brothers Mario obviously played a not insignificant role in popularizing and defining platform gaming, I would passionately argue that the Kong family took that earlier formula and perfect it.


But while I appreciate your humouring this trip down memory lane, I can almost hear you wonder what this has to do with comics.  That's what this site is all about, right?  I could focus on the series' many colourful characters, ranging from Donkey Kong and his labyrinthian family tree to King K. Rool and his kopious krew of Kremlins to the rest of the massive supporting cast that has been assembled over the years.  I could go on about the varied settings and incredible conflicts that have been fought all across DK Island, Crocodile Isle, the Northern Kremisphere, and beyond.  I could laud the gameplay, which is hands down still some of the most insanely fun video gaming I've ever experienced.  And I could most definitely praise the brilliant soundtrack provided by David Wise.  DKC had some of the best music in any video game ever, and anybody who says otherwise doesn't know what they're talking about.  Seriously, I still listen to those songs on a regular basis nearly twenty years later (how has this game been out so long?!). 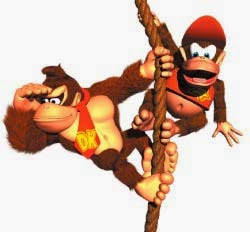 I could talk about all this and more, but most of all, I think what makes Donkey Kong a subject worth taking a week to play around with is how these many disparate elements came together to create something greater than their whole.

Or, if you're really dying for a parallel to comics, all you need to do is look to the fact that, in game canon, Donkey Kong's grandpa, Cranky Kong, was the original Donkey Kong from the arcade game of the same name (which also means that Donkey Kong Jr. is Donkey Kong's father).  This series not only has continuity, but it dates so far back that every single Donkey Kong video game is also technically a crossover with Super Mario Bros, which is completely amazing.  It also raises so many questions that nothing within these games can really stand up to close scrutiny (such as the aforementioned Kong family tree, which we won't even go into here).  If that isn't what comics are all about, then I don't know what is.

So while there's a good deal of nostalgia behind my choice this week, I like to think that Donkey Kong and company have more than enough going for them for some fun little tales taking a closer look at the wonderful world they inhabit.  I hope you agree.

Email ThisBlogThis!Share to TwitterShare to FacebookShare to Pinterest
Labels: Donkey Kong, Why