There's a lot of great names in comics.  If you're reading this site, such a pronouncement is unlikely to take you by surprise.  This week, I'd like to use my selection to direct your attention to a creator and their creations who you may not yet be familiar with.

There's a charming and delightful Canadian comicker by the name of Tony Cliff who, if he isn't already, should be on your radar.  This past August he released Delilah Dirk and the Turkish Lieutenant through First Second books, and let me tell you, that comic is one hell of a read.

I came across it almost by accident, stumbling across some preview pages while figuring out who to interview while covering New York Comic Con last year.  The art was absolutely gorgeous and I was instantly smitten.  I fired off a quick email to see if I could get in some words with Mr. Cliff and raced through the book in preparation.

Delilah Dirk is a terrific example of the strong female protagonist that so often seems to be lacking from mainstream comics.  She can hold her own in a fight, is never at a loss for a clever remark, and is completely without fear.  It also helps that she gets into all types of madcap adventures that recall a certain degree of Indiana Jones, but set in and around early 1800s Europe (or Africa, or North America, or...).

She also has a most delightful traveling companion in Erdemoglu Selim, the turkish lieutenant of that titular pair.  A brilliant tea maker, Delilah accidentally saves his life towards the beginning of the narrative, and while he isn't initially cut out for a life of adventure, he starts to grow into it (at least a little bit).

Delilah Dirk and the Turkish Lieutenant was one of my absolute favourite graphic novels of last year.  It's an enchanting mixture of history, humour, and hijinx that has many of the visuals and sensibilities of the European bandes dessinées that I love much, while also following various North American stylings.

However, like so many of my Thought Balloons selections, what it all comes down to is that Delilah Dirk is fun.  So.  Much.  Fun.

I am ever so excited to know that a sequel is already in the works, but for the moment, I'm also rather excited to spend some time playing in that sandbox this week.  Should you be unfamiliar with Delilah Dirk, Selim, and company, the first half of Delilah Dirk and the Turkish Lieutenant is available to read free of charge at the Delilah Dirk website.

Feel free to give it a gander, and then don't hesitate to join in on the fun! 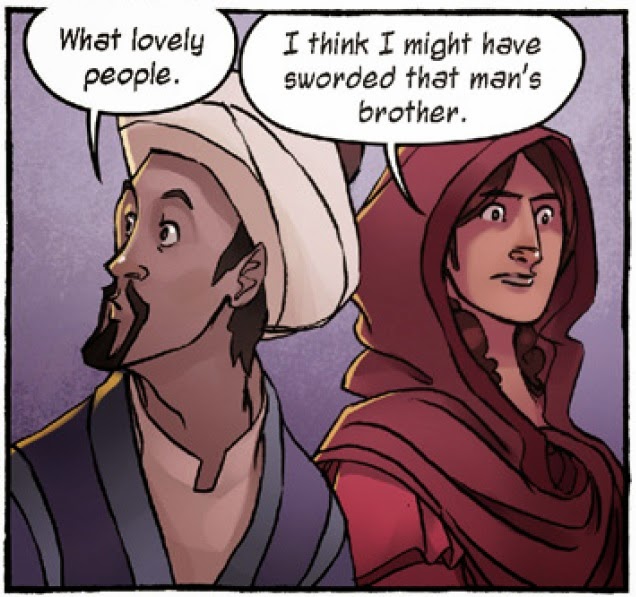 Email ThisBlogThis!Share to TwitterShare to FacebookShare to Pinterest
Labels: Delilah Dirk, Why