When he was a little boy, Arnold Wesker saw his parents gunned down by mobsters and, as a result, developed a dark alter ego to cope with the trauma. Sound familiar?

The Ventriloquist has always been one of Batman's most underrated villains. He is, in a nutshell, everything the Dark Knight's rogues gallery represents: Absurd, but still dangerous. A meek, nervous, badly dressed man who expresses his darker thoughts via a ventriloquist dummy which he gives a cruel, manipulative personality. 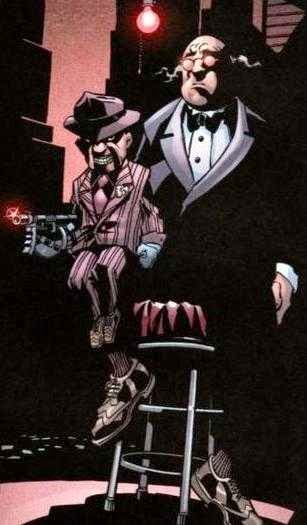 Like most Bat-villains, the Ventriloquist also represents a form of mental illness gone wrong. In this case, dissociative identity disorder, sometimes called multiple personality disorder. To Wesker, his dummy, Scarface, is a completely different person from him. He genuinely has no idea he's the one from whom these evil ideas spring forth; it's all Scarface's fault.

Having been part of Wesker since he was a child, Scarface is very much the dominating personality. Wesker knows what Scarface does is wrong, and often tries to speak out against him, but always to no avail. Leading to the question of who is the puppet and who is the puppeteer?
Written by J.D. Coughlan at 12:00 PM

Email ThisBlogThis!Share to TwitterShare to FacebookShare to Pinterest
Labels: J.D. Coughlan, The Ventriloquist, Why, Why?