But why?  What makes this character one of the most dangerous in comics history?  For that, one needs to look at the psychological make up of the man.

Norman was always driven to succeed.  Ruthlessly, so as not to become like his alcoholic and abusive father who drove them to bankruptcy.  And he succeeded because of this.  But as the saying goes, the apple doesn't always fall far from the tree.  At least in this instance.

In the fear of bankruptcy Norman tested an experimental formula on himself, which later became known as the Goblin Formula.  It drove him mad, gave him super strength as well as a healing factor.  But from all we have seen of Norman before he took the formula, did it truly make him mad or was it just an excuse to to be more ruthless.  The part of his psyche that knows right from wrong would need justification for the acts he was about to commit.  The 'madness' of the Goblin Formula was what he needed to justify his evil deeds to himself. The Goblin was a way for Norman to control his feelings on inferiority, jealousy, vengeance, anger and worthlessness.  He was personifying the negative sides of his personality, putting on the mask allowed him to deal with these issues less they corrupt him.

When Norman met Harry's best friend Peter Parker, he saw in Peter what he wanted Harry to be.  A naturally gifted scientist.  He admired Peter.  Took pride in him.  That is why he took it as a personal insult when he found out who Peter Parker really was.  The one person who could bring everything down around him.  Peter was his arch nemesis, Spider-Man.

We are given a glimpse into the vulnerability of Norman during Sins Past.  In it, Gwen sees the scared individual that no one else sees.  She sees Norman without his mask.  However did Norman truly open up to Gwen, or did he simply manipulate her to get at Peter.  Either way it spelt the end for Gwen Stacy. 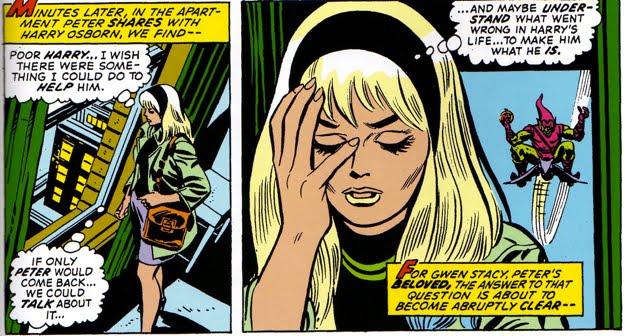 The death of Gwen at Norman's hands can be looked at from different angles.  Was she used as a way to attack Peter, a way to get control of the kids he sired with Gwen?  Or was it something much more deep rooted.  Norman took from Peter the love that Norman had been denied. Norman saw himself in Peter - what his life could have been, and hated it. He blamed Peter for his choices, but was really blaming his dead father - an unseen force which guided his hand.  It is because of this that we can see why Norman was obsessed with destroying Peter's life.  Driving Peter insane was retribution for what he 'did' to Harry.  He was punishing Peter because in his eyes Peter was he.

He orchestrated the Clone Saga in grand plan to send Peter mad - making Peter think he was a clone, kidnapping and faking Aunt May's death, killing his child.   However, because Norman only sees people as a way to achieve his goals he did not take into account of he and Ben Reilly bonding.  It was this bond that gave Peter the determination to pull through, to persevere the Clone Saga. This is when Norman knew that he had to return to New York and take more direct role in the life of Peter Parker.

Norman returned and purchased the Daily Bugle purely to mess with Peter.  To show him how he has and will continue to control every aspect of his life.  And yet Peter did not break.  He came close, attacking Norman in his home (and being set up by Norman because of it).  But Peter still pulled through.  And Norman hated him more for it.
How dare Parker find the strength to make the best of a situation even after he had driven him through hell. Norman was jealous that Peter had this ability, where Norman held on to things.

Norman realised that he was never going to beat Peter.  He was resolute and strong willed, just like Norman (in his own eyes).  Therefore Peter was the true heir to the Goblin legacy - his legacy. Instead of torturing Peter as a bizarre form of punishment, he wanted to make Parker like him - to justify the choices he had made in his life. To prove that no matter the choices made, they would end up in the same place each time. He laced minute quantities of the Goblin Formula in Peter's tooth paste, and slowly began his manipulation of turning Peter into the next Goblin.  However, Peter once again triumphed.  He was able to  knock back the one thing that Norman could not - the excuse to do what ever you want.  The excuse of the Goblin Formula.  Norman realised that Peter was a better person than he was or could ever be.

After this Norman realised that Peter would not be turned, and for the first time looked at himself and his life choices. Norman, for the first time was making choices without justifying it, and Norman became severely depressed because of it.  He injured Flash to lure Peter into a final confrontation - to be killed by his better. Only Peter was worthy enough to do so. When Peter refused to kill him, instead sentencing him to something worse than death - to live a life with the knowledge of what he has done. Norman is left to live in his own private Hell. The Goblin Serum could not heal him from this. Peter had control over Norman.

After he is outed as the Goblin he seeks to regain the power that Peter has over him.  He forces Peter to compromise his morals and break him out of jail.  In his mind, Norman had once again established himself as Peter's better. He was no longer The Goblin, but Norman Osborn. Being unmasked publicly meant he was free of that persona - or so he would believe.

Once again using all his charisma and influence he managed to become the leader of the Thunderbolts.  However the Goblin side of his persona - all the fears and feelings of failure he had felt and personified which he had believed he had buried was not done with him yet.  These feelings of worthlessness and abandonment (which exhibited themselves in the form of vengeance, jealousy and violence) would not stayed buried, and the Goblin came back extracting revenge on his Team, killing The Swordsman.

It is from here that Norman focused on getting back the power that was taken from him. Taking it back from Peter was only the start.  He needed more.  He yearned and hungered for it.  By taking more and more power he was showing to himself that he was not a failure.  He was stronger than the depression that once claimed him.

From here a balance was found between Norman and The Goblin.  Norman was able to manipulate his way into ruling Hammer.  His confidence and peace with his goblin personality (ie his issues) feeding his ego.  He was the most confident and most dangerous he had ever been.  So much so he saw Peter as below him.  He did not need to worry about such an insignificant bug any more. He saw himself as a true hero - which is why he became the Iron Patriot.

It was during the Siege of Asgard that it came undone.  He was revealed to be wearing the goblin face paint under the Iron Patriot mask - something that completely threw him off.  But why was he wearing the face paint? It was his ego - he was secretly using it as a way to laugh at the people who he believed looked at him as a hero.  While they believed him to be a hero and changed man, he was secretly showing that he was the same Norman. What's more, he did not want to let the Goblin go.  Norman found comfort in having the Goblin close to him.

This is highlighted in Kelly Sue Deconick's OSBORN miniseries.  We see a throwback to the Goblin Cabal from Clone Saga (formally the Scriers) . In this series Norman comes to accept the Goblin as a friend.  He is not at peach with the Goblin - they are a team.  The Goblin would always be shown to be looking after Norman.

After gaining more power Norman christens himself The Goblin King.  He has  regressed fully into his Goblin persona - the safe zone.  He came so close to becoming more of a person, but in the end was not strong enough to follow through with the process. Making matters worse for Norman was that Doc Ock had managed to do what Norman never could - not only 'kill' Peter but become a superior Spider-Man.  Because Norman sees his personality twinned in Peter, Norman took this as an insult and set about destroying Spider-Ock in a much more ruthless and aggressive manner than he has ever attempted before.

It was Peter's return to his own body, and subsequent removal of the Goblin Formula by him that stopped Norman's rampage.  With the ability to change how he looks (thanks to becoming a Super Adaptopid in New Avengers) Norman has a new lease on life.  The Goblin Formula/fear and insecurities have been stripped from him, and he is free.  Free to do whatever he wants as Norman Osborn.

We are yet to see the choices he makes.

Email ThisBlogThis!Share to TwitterShare to FacebookShare to Pinterest
Labels: Norman Osborn, Why