Why the Hawk and the Dove?

In case you couldn't tell, I'm a bit of a fan of DC Ditko, but of all his concepts, the one that I think really got the shaft were these two. 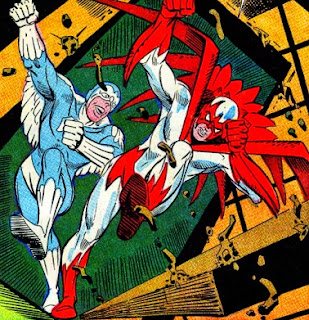 Hawk and Dove were the Hall brothers, Hank and Don. When their father, a fair but tough-as-nails judge, was threatened, they were visited by the Lords of Order and Chaos and granted the powers of the avatars of War and Peace. As a reflection of the opposing viewpoints of late sixties America, they couldn't be more on the nose.
The problem was that every writer after Ditko and his partner Steve Skeates has treated them as the worst of stereotypes. Hank has frequently been cast as a bullying jerk, and Don typically acts as a weeping dishtowel of a wimp. It wasn't until the excellent Brave & Bold #181, by Alan Brennert and Jim Aparo, that they finally started getting fleshed out.

Unfortunately, just as they started getting interesting, Don was killed in the Crisis of Infinite Earths, and Hawk, without his Dove, became unbalanced. Even the introduction of a new Dove, Dawn Granger, couldn't fix the damage done, and belligerent Hank spiraled into villainy, first as the future despot Monarch, then as the time-travelling Extant. DC tried to revive the concept with the New 52, but...you know...Liefeld...

So other than the fact that they fill the third party in my Ditko trilogy, why pick them at all? Because the concept has so much unexplored potential. Hawks are sheltering nurturers of their young, and doves will protect their nests to the death. Imagine Hank as a Navy SEAL returned home to be a family man. And just because someone's a pacifist, doesn't make them any less brave; what if Don, instead of being the limp weakling, was a Coast Guard rescue swimmer, or a firefighter, protecting those in danger? Then there's the mystic aspect. Why did the Lords, in their infinite wisdom, pick these two to be their avatars? What powers might they have that have not been discovered yet? Can you picture them in a Vertigo book? I have.

That's what makes comics great. Warriors, protectors, they are whatever you bring to the party. And feel free to bring your best interpretations and ideas. Just leave a page of script down here in the comments section. We'd love to hear from you.
Written by American Zombie (R. A. Wonsowski) at 12:30 AM

Email ThisBlogThis!Share to TwitterShare to FacebookShare to Pinterest
Labels: Hawk and Dove, R.A. Wonsowski, Why, Why?