Because... because he's a cab driver. IN SPACE! 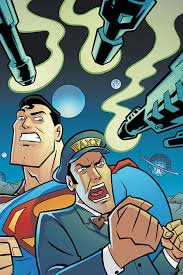 Created by Otto Binder and Howard Sherman, Space Cabby was originally introduced in Mystery in Space in 1954. He served as a narrator for tales told to his fares, and later as a protagonist in his own stories. Hi tales have been penned by such all-time greats as Gardner Fox and drawn by legends like Gil Kane. In the modern age, Space Cabby has kept busy, teaming up with Lobo and Superman, and making an appearance in James Robinson's superb Starman series. 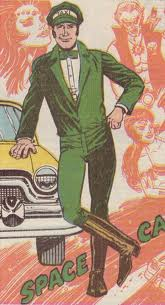 How does one get to be a Space Cabby? Well, our guy lives in the 22nd century, driving for 9-Planet Taxi. A natural at stellar navigation, he was once a fighter pilot, before picking up the keys to Cab #7433. He is a member of the 'Cosmic Order Of Space Cab Pilots' and 'Veterans Of Alien Wars'.

I have always loved the stranger, more fringe characters of the DC Universe. And ever since I read that particular issue of Starman, I have been obsessed with the idea of Space Cabby. Because, again, he's a cab driver. IN SPACE.

Yes, at least half of my love for this character is in the giggle-factor. Just saying his name genuinely makes me laugh. But the storytelling potential of a character like this is unlimited. Sure, he's probably not A-List material. I certainly don't envision DC green-lighting a SPACE CABBY series or anything. But how much fun would a Mystery in Space anthology be? And Space Cabby could be right there, anchoring the book, telling his fares stories about Adam Strange, and Lobo, and the Legion of Super Heroes. Like a cosmic Crypt Keeper. With a taxi. IN SPACE!

Written by Travis M. Holyfield at 7:33 AM

Email ThisBlogThis!Share to TwitterShare to FacebookShare to Pinterest
Labels: Space Cabby, Travis M. Holyfield, Why, Why?