That one line had me.

A storyline that not only celebrates every incarnation of everyone's favourite wall crawler, but features them in a battle against what is possibly the finest modern day villain to come from the Spider-Man corner of the Marvel U. For those of you not in the know (shame on you) The Superior Spider-Man (Doc Ock in Peter's body) travelled though time and discovered Spider-Men and women from parallel universes were being eaten (well, their energy at least) but a family of life force draining vampires (of which Morlun is a sibling).

Ock starts to gather and recruit Spiders to form an army to fight - so far we have seen Spider-Ham, Ben Reilly, a young Gwen Stacy in the spider garb, as well as new creations such as Penelope Parker written  by Katie Cook of My Little Pony fame.

It appears with the Secret War looming Marvel editorial has opened up the doors for their creators to come up with their own Spider-Hero.  Something that we could not ignore over at Thought Balloons. 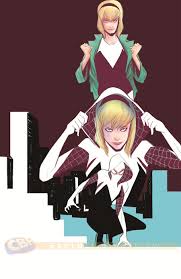 If you have a Spider-Man related hero in you, feel free to post it below in the comments section.
Written by Ben Rosenthal at 12:00 PM

Email ThisBlogThis!Share to TwitterShare to FacebookShare to Pinterest
Labels: Spider-Verse, Why