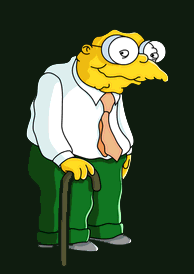 If you can tell the difference....


The Mole Man was originally Harvey Rupert Elder, an American nuclear engineer and explorer. Elder was socially shunned due to a combination of his abrasive personality and his homely, dwarfish appearance. Furthermore, his fellow explorers ridiculed him for his eccentric, crackpot theories regarding a Hollow Earth. In 1956, while following the group of explorers called the Monster Hunters, he stumbled upon Monster Island, which was at the time a base of the Deviant Warlord Kro.

When Elder fell into a massive cave leading deep into the underground realm of Subterranea, he decided his theories had finally been vindicated. However, he suffered permanent damage to his eyes when he gazed directly upon a highly reflective deposit of diamonds. Partially blind and apparently secluded from the surface world forever, Elder dubbed himself the Mole Man and began exploring his new home. He eventually became the ruler of the branch of Subterraneans now known as the Moloids, and the ruler of much of Subterranea and the caverns of Monster Isle. He used the Deviant-derived creatures and technology that he found in Subterranea to strike back at the outer world in numerous attempts to rule or humble the world that had rejected him.

Sure he has jumped between good and bad, but to me he will always get a boo.

Written by Ben Rosenthal at 9:03 PM

Email ThisBlogThis!Share to TwitterShare to FacebookShare to Pinterest
Labels: Mole Man, Why?