(Originally, I was planning on taking a page from Ben Rosenthal’s book and re-working a page I previously wrote but was unhappy with.

But then, when I thought about it, I realized the correct answer for this week would be to pay another visit to what I think has managed to become my signature duo here at Thought Balloons, the unlikely but always fun pairing of Animal Man and Gorilla Grodd.

Notably, this particular script is heavily based on a particular newspaper comic strip you may well recognize – bonus points to the first one to correctly guess which one!)

Panel 1: DARKSEID overlooks his minions as he prepares for war.

ANIMAL MAN: (Text Box) We have a massive problem. Darkseid is getting ready to attack Earth. Again.

Panel 2: Human citizens as they go about their daily lives.

ANIMAL MAN: (Text Box) And we have no idea who to trust or how to stop him this time.

Panel 3: Three gorillas fly through the air, SUPERMAN style, complete with capes. GRODD should be among them, and have a SUPERMAN style ‘G’ on his chest.

Panel 4: Inlaid within the corner of PANEL 3. GRODD and ANIMAL MAN are discussing the issue. ANIMAL MAN is wary of GRODD’s plan, GRODD isn’t keen on ANIMAL MAN not liking it.

GRODD: I’m taking it seriously like you would not believe!

(END PAGE)
(And as a bonus, have my attempt to draw my script for the week!) 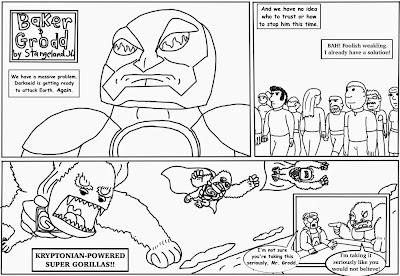