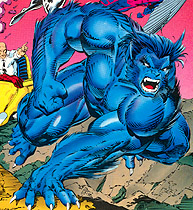 When people think of the X-Men, they tend to think of Cyclops as their premiere member – Wolverine may get all the publicity, but Cyclops is the classic leader, the one who’s seen as carrying on his legacy, the guy you’re supposed to think of as the new future of mutants when Professor Xavier isn’t around.

Except he does a lousy job of carrying on ‘Xavier’s Dream’, the part about humans and mutants living together in peace and harmony. For that, you should instead look towards the likes of Dr. Hank McCoy, AKA Beast.

Most X-Men are typically considered ‘X-Men’ and leave it at that. A handful manage to stretch beyond those boundaries, Beast being among the most prolific. Avengers? Beast has been there, both mainstream and as a handpicked member of Cap’s secret variety. Defender? Beast has done that. SWORD? Beast counts it among his resume, even serving hand-in-hand (sometimes literally so) with its commander, Abigail Brand. It’s even more notable when you take adaptations into account. In the movies, who’s the one mutant you see openly serving in a prominent government position? Beast, of course.

And he does this in spite of being an ‘obvious’ mutant who’s covered in blue fur. Most mutants could get away with pretending to be humans if they wanted to. Beast? He really doesn’t have that option.

Cyclops may be the future of the X-Men, but if you want the future of Mutantkind? They might be better off if they tried following Beast’s example instead. 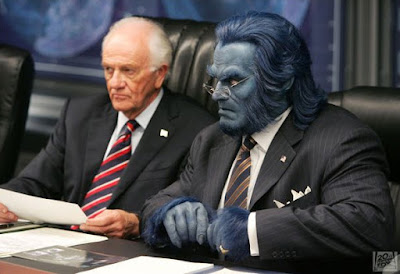 Email ThisBlogThis!Share to TwitterShare to FacebookShare to Pinterest
Labels: Beast, Why?