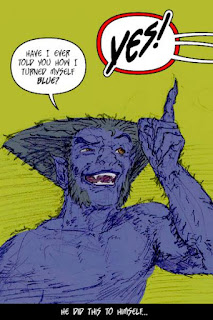 1/ In the poorly-lit courtyard of the Brand Corporation, The Beast wrestles with The Griffin.  Hank McCoy's hair is a mixture of blue, black, and silver as his genetics are still struggling to find a happy balance between their usual Homo Superior markers and those of the hormonal extract he believes may be responsible for mutation, and still injected himself with.  Yeah.  Good one, Hank.  The Griffin, John Horton, is wearing a red suit meant to contain his own unstable genetics.  His benefactors have turned him into a walking mess of man, lion, and eagle in the hopes of obtaining Hank's extract for themselves.

Beast: Do you find it cause for concern that the cryptozoological entity whose name you employ is not the same as the one you physically resemble?

Griffin: What-- What do you mean?


2/ Close-up on Beast.  He is expositing brightly as he continues to push against The Griffin.

Beast: Well, griffins, if the stories are to be believed, did have leonine bodies, as you do, but their heads were supposedly those of eagles, whereas you have chosen to continue the leonine motif.

Beast: Not a look I would choose for myself, mind you, but to each their own.


3/ Close-up on Beast.  He is purposefully messing with Horton.  That much should be obvious through his sideways glance.  Their fight requires so little of his concentration.

Beast: And then there's the tail...

Beast: No, no, no.  I do believe, good sir, that you are supposed to be a manticore.


5/ The Griffin knocks The Beast back.  All this talk has confused and enraged him.

Griffin: Those jerks from The Secret Empire told me they'd make me powerful...

Griffin: How was I supposed to know they'd turn me into this-- this freak!?


6/ The fight is distracted by Linda Donaldson, an attractive blonde woman leaning over the railing of a nearby stairwell.  She is dressed in appropriate businesswoman's attire.  The exact kind of person you would expect Hank McCoy to fall for.  Almost like she was planted there specifically to lure him into a false sense of security.  The Beast is not happy to see her throw herself into this situation, and less so that she's siccing armed personnel on him.  The Griffin, though he says nothing, is equally concerned by these men and their guns.

Email ThisBlogThis!Share to TwitterShare to FacebookShare to Pinterest
Labels: Beast, P. A. Nolte