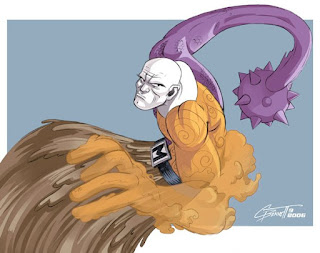 Is it starting to show that I kind of like the weirdo characters?  Especially when it comes to DC.  More than another Batman or Superman yarn, I want a good Vibe story.  Or Blue Devil.  Or, in the case of this week's prompt, Metamorpho: The Element Man!

Created by Bob Haney (Metal Men, Doom Patrol) for the January 1965 issue of The Brave and The Bold, Rex Mason's particular brand of big, dumb fun earned him a 17-issue solo series based on his adventures.  Altered beyond repair by the Orb of Ra, Mason took naturally to superheroics, using his newfound ability to turn into any element or compound known to man to fight crime, because that's just what you do when ancient Egyptian artifacts destroy and rebuild you.  He also fell in love with Sapphire Stagg, the daughter of Simon Stagg, his employer, and the man responsible for his condition.

As a founding member of The Outsiders, a former Justice Leaguer, Doom Patroller, and Outsider again (although at first that was actually a small part of him that broke off and achieved sentience of its own before being reabsorbed into Rex later), Rex is thoroughly entrenched in the DCU at large.  And, though he may be a bit of a freak, he's got a lot of heart, and he might be immortal.  So at least he's got that going for him.

PS: Sorry to spoil a minor plot thread towards the end of Judd Winick's Outsiders run.  You should read it anyway just for Grace.  Totally worth it.

Email ThisBlogThis!Share to TwitterShare to FacebookShare to Pinterest
Labels: Metamorpho, Why?