Many readers are no doubt already familiar with Winsor McCay’s classic comic strip, Little Nemo in Slumberland. But, if you’re not, they basically involve a young boy embarking on journeys into various dream realms. McCay created these dynamic, wildly colorful, 22” x 17” full-page comic strips during the first two decades of the twentieth century. And his work has influenced a great many comics creators, as well as filmmakers and children’s book authors (many kids are first introduced to Little Nemo unknowingly through Maurice Sendak’s homage to McCay, In the Night Kitchen).

So I decided to set us up with this thoughtballoons prompt—to write a dream-based comic in the spirit of McCay’s Little Nemo strips—for two reasons.

First, I thought it’d be fruitful to muck about inside the mechanics and imagination of McCay’s storytelling. A hundred years ago, McCay was confronting challenges of sequential art with which contemporary creators still wrestle. How does each panel work on its own, while contributing to the full page’s visual integrity? How does the eye move between panels, and across the page, and what effect does this movement have on the reader’s imagination? Though his style evolved over the strip’s run, McCay had very particular rules that he worked out for himself—and I wanted to see what it was like to play (roughly) by his rules.


(For example, as I worked on my own Nemo-inspired comic, I found myself thinking a lot about how McCay’s early strips set up Nemo’s adventures in the first panel. During 1905, McCay would begin each comic with a panel in which one of King Morpheus’s courtiers sets in motion a plan to fetch Nemo. During that first year of strips, Nemo never actually reaches Slumberland—some crisis emerges in the penultimate panels causing him to wake, disheveled in his bedsheets, in the final panel. While neither the dream-folks’ plan to fetch Nemo nor the boy’s own journey is achieved, the arc of each page-long story is clearly established in that first panel. I wanted to see if I could incorporate that structure and approach in my own comic.) 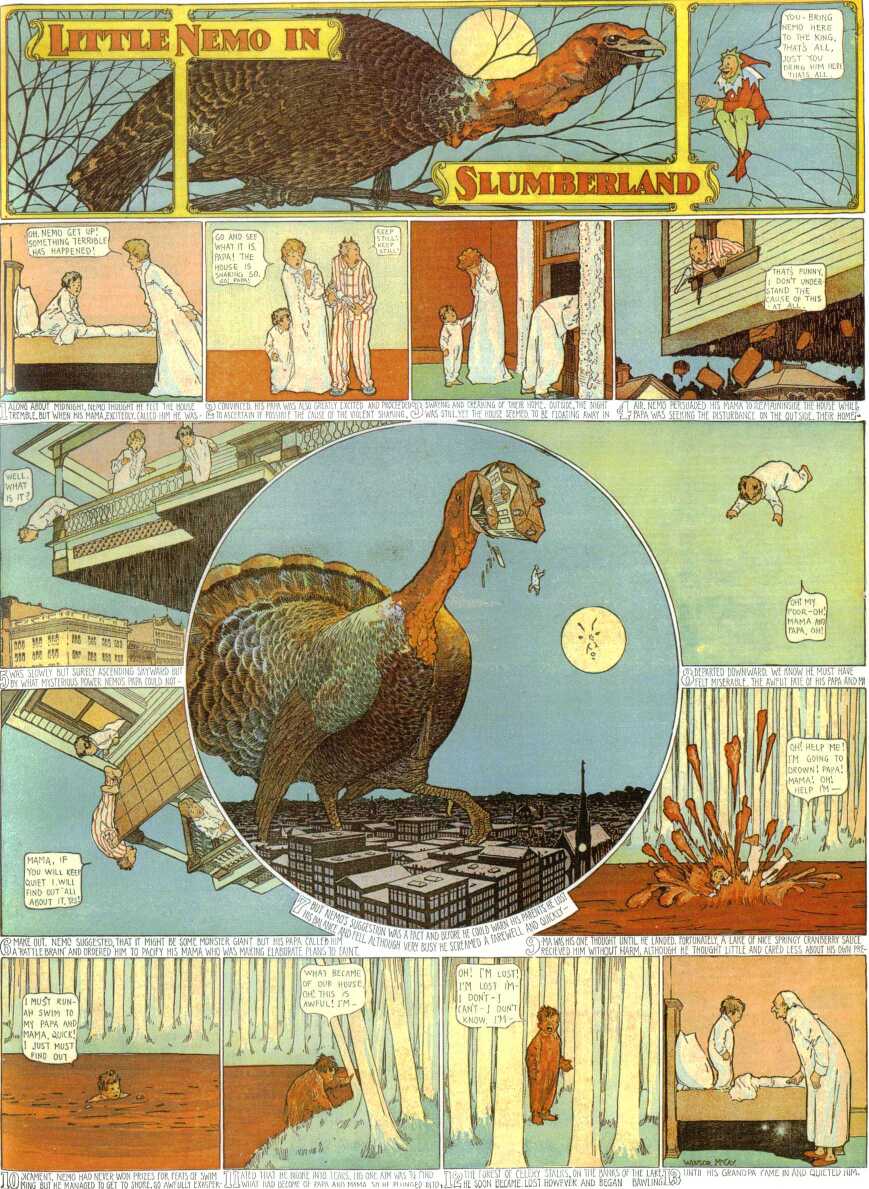 Second, I thought it would be interesting to muck about with actual dream material. Everyone knows that telling someone else one of your dreams nearly always leads to a glazed, bored expression. Even if we can recognize certain shared concerns or anxieties, another person’s dreams are just too specific to her own subconscious—the hodgepodge of data drifting about in each of our strange mental landscapes. But when I was reading McCay’s strips, I was struck by how he seemed to have such a good grasp on the way dreams can work: the narrative logic used in some of McCay’s early strips seemed familiar to me. 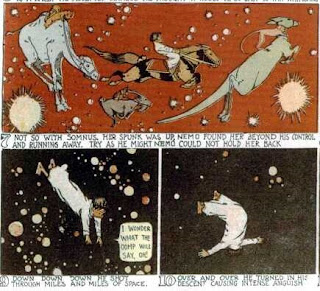 So, in putting forward this prompt to the thoughtballoons crowd, I wondered what would happen if we channeled one of our own dreams—in all its particularity and oddness—through McCay’s storytelling form. How much of a dream’s non-narrative nature can be kept intact as we translate it into a one-page story with a beginning, middle, and end? How do we write our memory of a dream for another artist — perhaps a stranger—to draw?

The story should be in the spirit of McCay’s early twentieth-century strips: usually Nemo drifting off to sleep, finding his way into Slumberland (realm of dream and nightmare), with a final panel that interrupts the dream as Nemo wakes in bed, back in the real world. The idea here is to see what happens when you give Nemo one of your own dreams or nightmares to explore.

If you like, as a bonus, mess about with McCay’s caption and dialogue style: he often included footer captions narrating each panel, plus dialogue.

For reference, there are a bunch of the strips online, but here’s a handy glimpse at a few.
Written by Grant McLaughlin at 12:00 PM

Email ThisBlogThis!Share to TwitterShare to FacebookShare to Pinterest
Labels: Colin Cheney, Little Nemo in Slumberland, Why