Why The Orient Express?

Care of P.A., who is having some computer difficulties at the moment.

About 130 years ago, this little train company started up. You might have heard of it. Compagnie Internationale des Wagons-Lits? ... Okay, maybe not. But I'll bet you've heard about their little train(s) that could: The Orient Express. 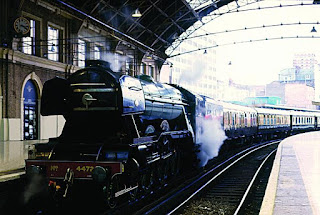 Setting off for Giurgiu, Romania, le Express d'Orient left Paris on October 4, 1883, and even though the first train didn't exactly provide the most luxurious travel, that is exactly what The Orient Express and CIWL have become synonymous with.

The train itself features prominently in Bram Stoker's Dracula, Ian Fleming's From Russia, with Love, and, well, Agatha Christie's Murder on the Orient Express. But, if literature isn't your thing, you still might have heard about it from Doctor Who, Chuck, Teenage Mutant Ninja Turtles, or every piece of fiction with a train in it produced after October 4, 1883. Roughly.

Having said all of that, know that our theme for this week does not need to be taken entirely literally. If you don't want to write about a historic train, don't. Put it in space, or underwater, or through the center of the earth. Snowpierce it up. Just make it fancy!

And, as always, if you're one of those people still standing on the platform, gazing longingly down the track, it's time to get that ticket punched.
Written by Grant McLaughlin at 12:00 PM

Email ThisBlogThis!Share to TwitterShare to FacebookShare to Pinterest
Labels: The Orient Express, Why