(In the year 200X, the robots ROCK LIGHT and ROLL LIGHT rebelled against their creator, DR. THOMAS LIGHT. They imprisoned him and launched a robot uprising with the help of the eight ROBOT MASTERS.

In this time of chaos, the world found hope from an unexpected hero. A scientist, DR. ALBERT WILY, wanted by the law for crimes he did not commit, armed himself with the MEGA SUIT. With this weapon, a man the world turned its back on it became its last hope. A man the world will know as…MEGA WILY!) 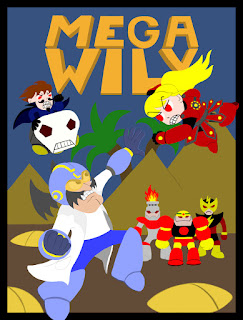 Panel 1: WILY lowers his arm as he looks up at ROCK and his miniature floating BATTLE FORTRESS.

WILY (2): You’ve already done that yourself.

ROCK: I fail to understand.

Panel 3: WILY looks up at ROCK – the look on his face makes clear he knows exactly what he’s doing.

WILY (2): It was never part of your original design. That much I know for sure. You’ve added it yourself, for the same reason you’ve failed to abandon your current form.

Panel 4: Close up on WILY as he prepares to deliver the final knockout blow of his logic bomb.

WILY (1): Thomas may not have succeeded in giving you the true self-awareness and freedom of choice he longed for, Rock, but he came far closer than he realized.

WILY (2): Because deep down inside, you yourself are the very thing you claim to be inferior and seek to destroy.

Panel 5: ROCK looks like he’s about ready to freeze up as his brain fails to compute what WILY is telling him with his existing data.

WILY (1): Somewhere inside that metal shell of yours, you are, in fact…