Because she's one of the last characters I would want to write. 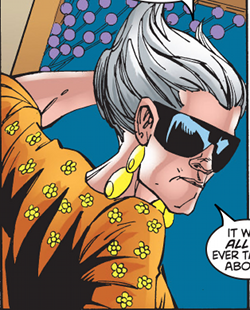 Let me back up.

Of course, seeing as we'd already done the ol' Merc with a Mouth, an alternate was required.  Thinking over the many figures who would be appearing in the film in one way or another, I couldn't help but feel Blind Al would be the hardest one to write.  Her relationship with Wade has always been that balance of antagonistic but friendly that's so challenging to hit but so satisfying to experience.  While a longstanding member of the Deadpool clan, there's still all kinds of unknown aspects to her character to explore.  And an old blind woman who's sassy as hell is about as far outside my wheelhouse as I could imagine. And that's what this writing thing is about.  Pushing yourself and facing down the obstacles that look ever so daunting at first blush.  I didn't have much of a clue what I'd write when we settled on Al, so here's hoping I managed to get somewhere.

Let's do our Thought Balloons' tradition proud and write the hell out of some Deadpool-adjacent characters, shall we?  As ever, we'd love to see you join us down below in the comments with scripts of your own.  If I can figure something out, I have every faith you can to. Email ThisBlogThis!Share to TwitterShare to FacebookShare to Pinterest
Labels: Blind Al, Why