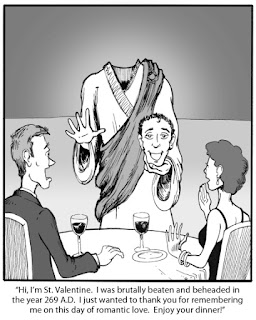 We know a few things about St. Valentine.  Kind of.

1. He is a third-century Roman saint commemorated on February 14 and associated since the High Middle Ages with a tradition of courtly love. (Thanks, Wikipedia!)

2. He was martyred, beheaded, and buried in northern Rome in a cemetery along the Via Flaminia, a once-important but now outdated Roman road. (Thanks again, Wikipedia!)

You see, history can get a little muddy sometimes, and what we know as Valentine's Day, similar to what we know as Christmas, is actually a reskinning of earlier traditions.  In this case, Lupercalia, superseded by the Feast of St. Valentine established by Pope Gelasius in 496 AD.  Of course, the whole concept of a day of courtly love also might be a whole cloth fabrication of Geoffrey Chaucer's from the late 14th century (ie: The High Middle Ages) that just so happens to coincide with the 14th of February.

So.  The challenge for this week is adding to the myth of St. Valentine.  Be he a historical priest, a noir detective, a dashing space pirate, or some other archetype.  Subversive or not.  Put your own spin on his exploits, and put some love into your script.

Email ThisBlogThis!Share to TwitterShare to FacebookShare to Pinterest
Labels: St. Valentine, Why?