1/ A naked woman, slightly disheveled, clings to the wheel on the heavy metal door of an ornate containment unit to help keep herself upright.  She is tastefully covered by her voluminous black hair and copious amounts of steam, like The Birth Of Venus.  The unit is boxy, akin to a modern day furnace, with brass tubing and several receptacles on the side. Only one receptacle is currently used, holding what looks to be a half-empty glass jar of orange mud.  The woman looks like a frightened animal.  She's suffering temporarily from sensory overload.

These are the results of a man desperately trying to re-corporealize the spirit of his dead wife.

1.1/ Silhouette.  A man kneeling in front of a grave.  He holds a wilting bouquet.  Behind him, the sun sets.

1.2/ The same man, wearing goggles, working with metal. About to bring down a hammer.  Behind him, blueprints.

1.3/ He flips a switch on a console, lifting his goggles to see.  Behind him, the containment unit. 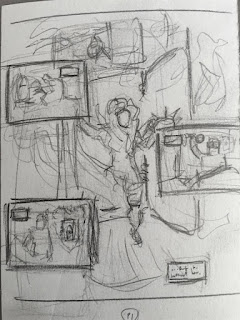