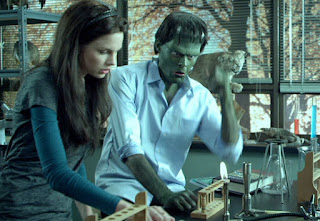 I know how it sounds.

You're picturing the inescapable sparkle of pouty vampires.  And that's fine.  If Sookie Stackhouse is your jam, by all means.  But let's not pretend that's the be-all end-all of Paranormal Romance.  Besides monstrous hits like Twilight, there are films like Warm Bodies and Make Out With Violence.  TV shows like Pushing Daisies and iZombie.  And there's more to the genre than just vampires and zombies.

There were werewolves, too, I guess.  Kind of.  It's a long story.

A quick glance through Wikipedia, if it can be trusted, will give you a publication year of 1740 for Gabrielle-Suzanne Barbot de Villeneuve's Beauty and the Beast, the version that popularized the fairy tale.  Of course, the story itself may actually be several thousand years old.  That's just a little longer than any undead denizens of Forks have been making googoo eyes at high schoolers.

So, this week, put a little jump scare in your rom-com.  Make some weird science.  I mean, just because she has bolts in her neck doesn't mean she isn't cute.  Right?

Email ThisBlogThis!Share to TwitterShare to FacebookShare to Pinterest
Labels: Paranormal Romance, Why?