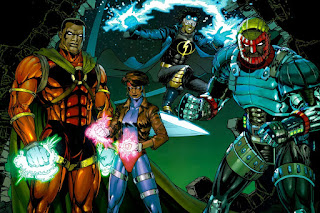 In 1993, DC Comics partnered with a young company founded by Dwayne McDuffie, Denys Cowan, Michael Davis, and Derek Dingle called Milestone Media that sought to produce stories that openly and honestly addressed issues of race, gender, ethnicity, sexuality, socioeconomics, and more.  They offered a diverse line-up of protagonists set in and around the fictional midwestern city of Dakota.  Hardware, Icon, Static, and the Blood Syndicate debuted first, with more titles like Xombi and Shadow Cabinet introduced later.

Until recently, I was most familiar with Virgil Ovid Hawkins, aka Static, as the star of Static Shock and from his appearances on Justice League Unlimited and Young Justice, along with Icon and Rocket.  But reading through Static's early comic run, I've come to really appreciate what I've seen of the Dakotaverse thus far.  Unfortunately, since Milestone Forever in 2010 and Static's quickly-cancelled New 52 title, rumblings from Earth-M have been intermittent at best.  It seems like a solitary Teen Titans membership is all we're going to see of any of these characters for a while, and that's a real shame.

So.  This week, do some research on Holocaust, Third Rail, or Donner and Blitzen, and put a little more social awareness into your spandex punchfests than you normally would.  And, if you're so inclined, play along at home.

Email ThisBlogThis!Share to TwitterShare to FacebookShare to Pinterest
Labels: Milestone, Why?