Because it's been too long since I've written a script from my all-time favourite type of prompt.

But I figured I'd sweeten the pot a bit, too. 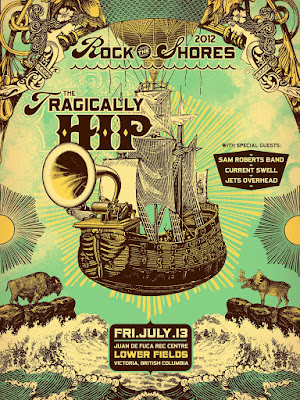 Stop me if you've heard this before, but The Tragically Hip - a major band in the Canadian pantheon - have recently wrapped their final tour. Gord Downie, the group's lead singer, was diagnosed with a terminal brain tumour earlier this year so they used their already planned tour for their latest album to have a big send-off to the country they call home. It culminated with a concert in Kingston, Ontario (their hometown) that was broadcast ad-free on our national broadcaster. It had an audience of 11 million throughout the evening, which is one-third of Canada's population. As you can see, it was kind of a big deal up here.

For my part, I'm not actually too familiar with the band and their music (only a few tracks here and there), but so many of my friends have been talking The Hip of late that it just felt right to dive into their concert poster back catalogue to pick something that caught my eye, so here we are.

As always, I'd encourage you to take the prompt in any direction you so choose.  If you've been big into The Hip for way too long, see where that takes you.  If this post and poster is the first you've heard of them, go with that.  And should you find yourself somewhere in between, that's just fine as well.

Tenures, play-at-homers, what matters is that you think on it, make a decision, and follow it through fully completely.