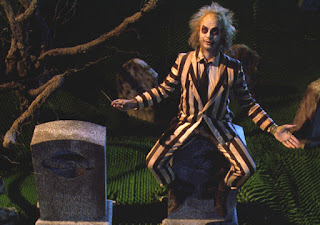 For years, Halloween has come and gone with nary a blip on TB’s radar.  Things start to get a little spookier in tone, sure, but not necessarily subject.  This year, we’re shaking things up.

As a self-proclaimed bio-exorcist, THAT GUY is kind of a dud. The movie ends with the Maitlands and Deetzes living together in a kind of grotesque harmony after all.  But there’s a lot more to him than getting rid of the living.  Some might say too much more… And they’re probably right.

It turns out, toning down his… ahem… proclivities and cranking his trickster figure underpinnings up to 11 as they did for the animated series, doesn’t seem to change much.  Even sanitized, THAT GUY is still very much himself.  A weird little nuisance who revels in the not-quite-right with a penchant for worms and spiders and the stereotypically macabre.  Just with slightly softer edges.

So, this week, in celebration of Halloween, we’re turning to inspiration from The Ghost With The Most.  The one.  The only.

Email ThisBlogThis!Share to TwitterShare to FacebookShare to Pinterest
Labels: Beetlejuice, Why?