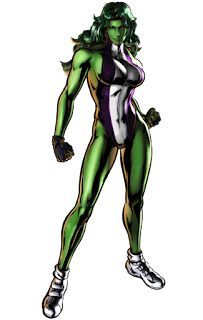 Before Deadpool, there was Jennifer Walters, AKA the Sensational She-Hulk.

It’s not as an absurd comparison as it might first seem. Both got their origins from very similar pre-existing characters. Both were played seriously at first before developing into the more light-hearted versions that we know and love today. Both take massive amounts of punishment and keep on going. And of all the characters at Marvel, they’re by far the best known for their habitual breakage of the 4th wall.


Odds are that if Thought Balloons existed decades ago instead of now, it might well be this ‘Why?’ instead of Deadpool’s that would be written in-first person.

On the other hand, Deadpool’s managed to headline multiple titles at the same time to the point over oversaturation, his own video game, makes regular appearance in animated Marvel works, and even has a unexpectedly popular movie.

She-Hulk…less so. But hey, no analogy is perfect.

But I digress. The point is that for a character that started out so connected to the original Hulk, Jennifer Walters has come a long way into her own, where oftentimes the connection between Hulk and She-Hulk is an much an afterthought as anything. She’s got a well-established on-again-off-again career as a lawyer, has been on at least half a dozen different teams, has an infamous reputation surrounding her love life, and when you get right down to it, probably runs circles around Deadpool when it comes to actually breaking the 4th Wall – Deadpool merely acknowledges his existence as a comic book character more often than not. Jen? At her best, the darn thing might as well not even exist.

Ultimately, she’s a highly versatile, highly fun character with lots of potential. So lets put some of the potential to work, shall we? 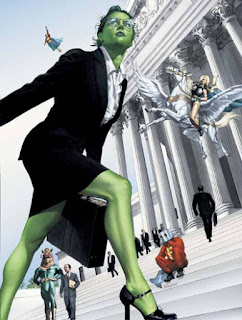 Email ThisBlogThis!Share to TwitterShare to FacebookShare to Pinterest
Labels: She-Hulk, Why?