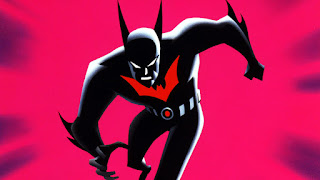 If not for The Zeta Project, Batman Beyond might be the redheaded stepchild of the DCAU that ran through Batman: The Animated Series to Justice League Unlimited.  It's a weird mish-mash of Spider-Man and Iron Man in a Batman shell.  Bruce Wayne's an old man and some punk kid gets to be Batman instead of Dick Grayson or Tim Drake?  And then The Return of the Joker.  And Epilogue.  It's a lot to take in.

But when Terry McGinnis faces off against the Jokerz, there's a comforting parallelism there.  Someone who has suddenly inherited a mantle he doesn't necessarily want going to war with a gang of idiots hellbent on emulating ideals they don't fully comprehend.  Themes that haphazardly deepen until Terry eventually faces The Joker himself.  Kind of.  There's also Shriek, Inque, a new incarnation of The Royal Flush Gang, and a handful of other villains that nicely fill some gaps in The Dark Knight's extended rogues gallery.

And that's what we're going to try and tap into this week. Because for every episode about Spellbinder, there's Terry's Friend Dates a Robot, or Heroes, or half a dozen others.  Stories that explore, however briefly, just how freaking weird it must be to live in Gotham, a city that was by all accounts a terrible place to live even before sixty plus years of elevated, bat-themed vigilantism.

Email ThisBlogThis!Share to TwitterShare to FacebookShare to Pinterest
Labels: Batman Beyond, Why?