Invader Zim may well be one of the great examples of Black Humor at it’s finest. 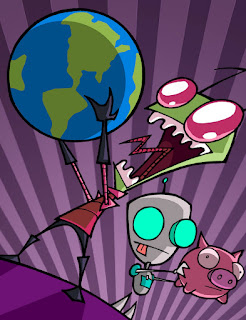 The protagonist is a villain – not a sympathetic villain, not a villain with a heartbreaking backstory, not a redeemable villain, not even a villain who’s motives you can understand. Zim is a straight-up evil alien intent on taking over the world because that’s his job (Well, technically it’s not, but that’s another story…) – and it’s a job he loves.

It’s setting is a universe that takes a super pessimistic view of life, where Earth is largely populated by idiots and misery is the status quo, held in check by what are realistically meaningless superficial distractions.

It’s a series where the narrative really only works because the average intelligence is below average. Even Zim himself is such a doofus of a screwup that he’s caused more damage to his own species than he has to Earth. And even the one guy who’s even aware of what Zim’s up to (in spite of the fact that Zim is realistically not that well hidden) gets frustrated enough that he questions why he even bothers sometimes.

And it works. Because while triumph makes for great inspiration and drama, failure makes for terrific comedy, and there’s nothing like laughing at the failings and shortcomings of others, especially when those failures are a good thing. It helps that the whole thing is served up with well-prepared writing that includes no shortage of ridiculous and bizarre humor that spares no effort in going over the top without shame.

Email ThisBlogThis!Share to TwitterShare to FacebookShare to Pinterest
Labels: Invader Zim, Why?