Why Guardians of the Galaxy? 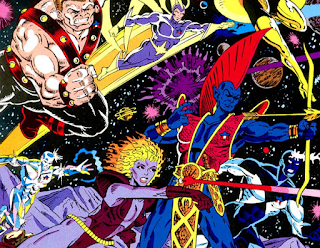 A movie finally came out in the US today.  It's a modestly anticipated sequel to a quiet little picture about a team of lovable archetypes that eventually find each other as more than just friends.  In the end, they're family.  There's also a bunch of stuff about some kind of purple gem, a wrinkly blue guy in a chair, and Glenn Close leads a corps of space pilots who are not all that great at space piloting.

Our prompt this week is, of course, The Fast and the Furious Guardians of the Galaxy.

I've been going back and reading some of the early stories featuring the original incarnation of the team.  There's some really great stuff by Gene Colan, Steve Gerber, and Sal Buscema.  But, if you're more inspired by Star-Lord and Gamora than Vance Astro and Martinex, so be it.

Post your script in the comments.  We'll see you next week.

Email ThisBlogThis!Share to TwitterShare to FacebookShare to Pinterest
Labels: Guardians of the Galaxy, Why?